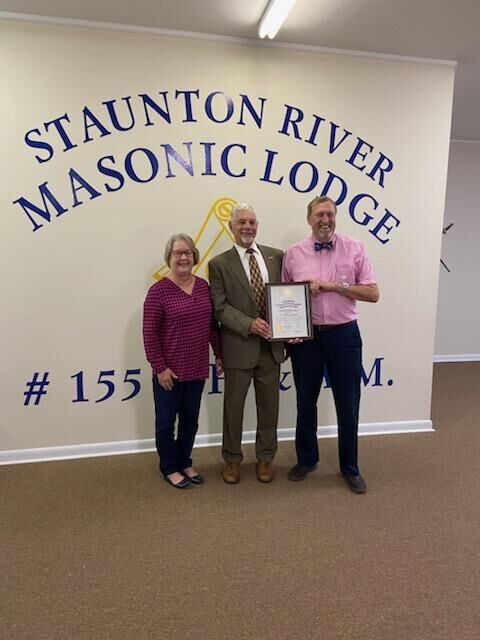 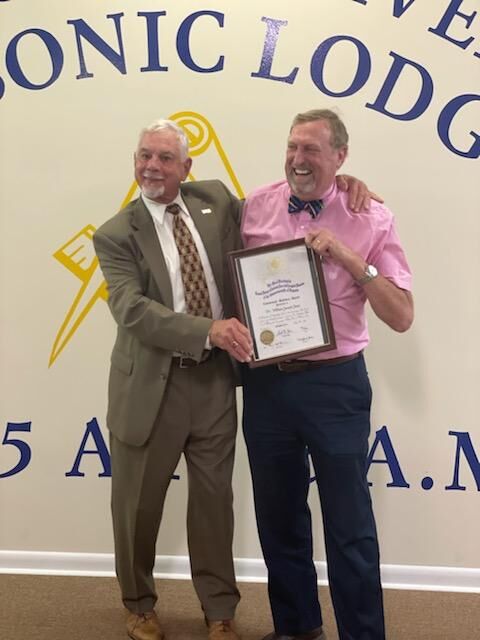 Jones’ longtime friend, Richard Holt, presented him with the award, and provided a good deal of biographical information about Jones for this article. Holt, who has worked for Virginia State Police for decades, said it was an emotional experience to be able to honor his friend, saying Jones had been on the Masonic Lodge’s list as an important person to recognize “for some time.”

Holt said the criteria for the Community Builders award include showing leadership in the community, setting a good example for others and helping people.

“He’s done a whole lot,” Holt said about his friend.

Jones has been a healthcare provider in the Brookneal area for decades, but grew up on a dairy farm near Rice, Virginia. In the sixth grade, Jones had to be hospitalized with rheumatic fever, an experience that had a profound effect on him.

“That time that the doctor spent with him inspired him to become a medical doctor,” Holt said.

After graduating from Prince Edward Academy, Jones went on to graduate from the University of Richmond and then the Medical College of Virginia. He completed a family practice residency in Blackstone, Virginia in 1983, and then moved to Brookneal with his family, where he joined Dr. Don Carwile at Brookneal Family Practice, which was later purchased by Centra Health.

Jones has been a member and president of the Lynchburg Academy of Medicine, been appointed a professor or instructor at several universities, worked as a medical examiner and as co-medical director of Heritage Hall in Brookneal, has hosted and trained medical students and residents and was awarded the Lynchburg Academy of Medicine’s highest honor, the William H. Barney Distinguished Service Award, among other career accolades.

Jones has been married to his wife, Carolyn, for 43 years. According to notes he provided, Holt made a point of recognizing Carolyn Jones before recognizing Dr. Jones at the Masonic Lodge’s meeting this month, commending her support and dedication. The Joneses have two daughters; Mary Dr. Catherine Martin is a family physician in San Francisco and Dr. Anne Matherly is a doctor of physical therapy in Richmond. Jones has six grandchildren.

In addition to Jones’ accolades, which Holt listed before presenting Jones with the Community Builders award, Holt will also happily tell you about Jones’ lighter side, which has led him to host several womanless beauty pageants and perhaps pull the occasional practical joke.

“There are many hardworking men and women who serve others with no expectation of acknowledgement or reward,” Holt’s notes from the October 7 meeting read. “Tonight, we recognize and honor such a man.”