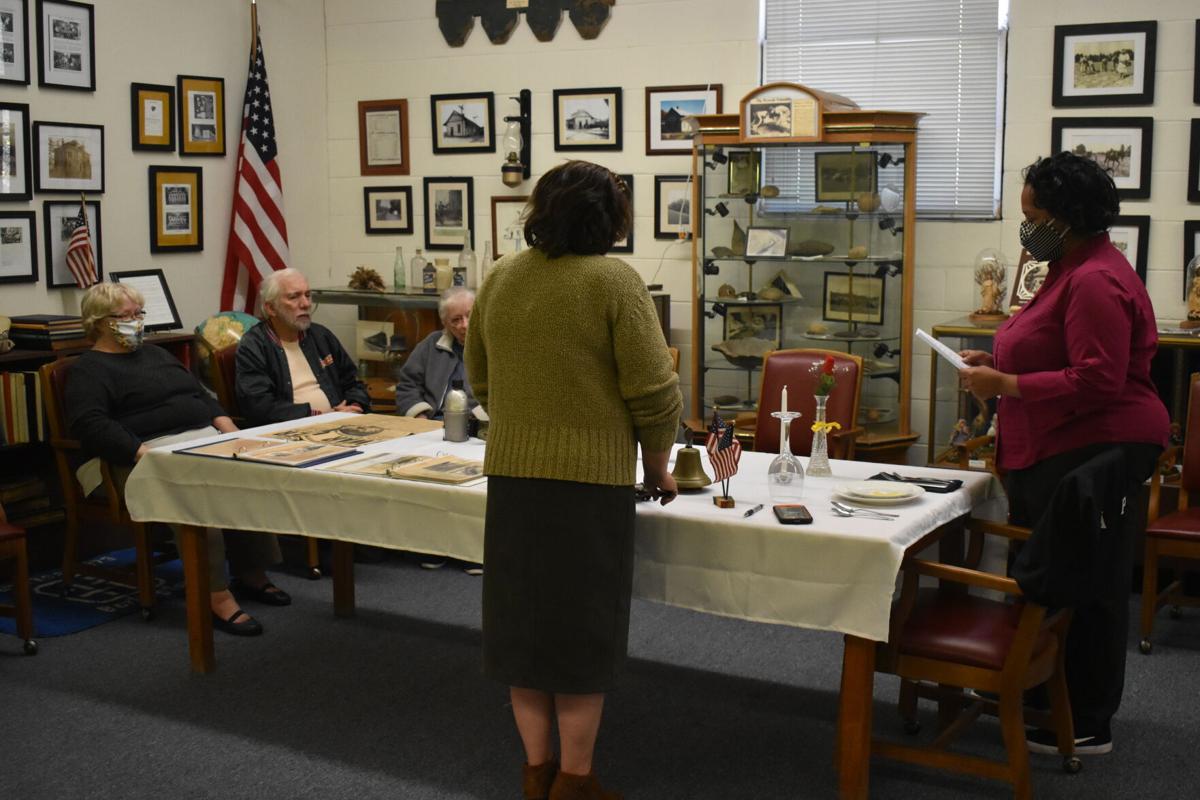 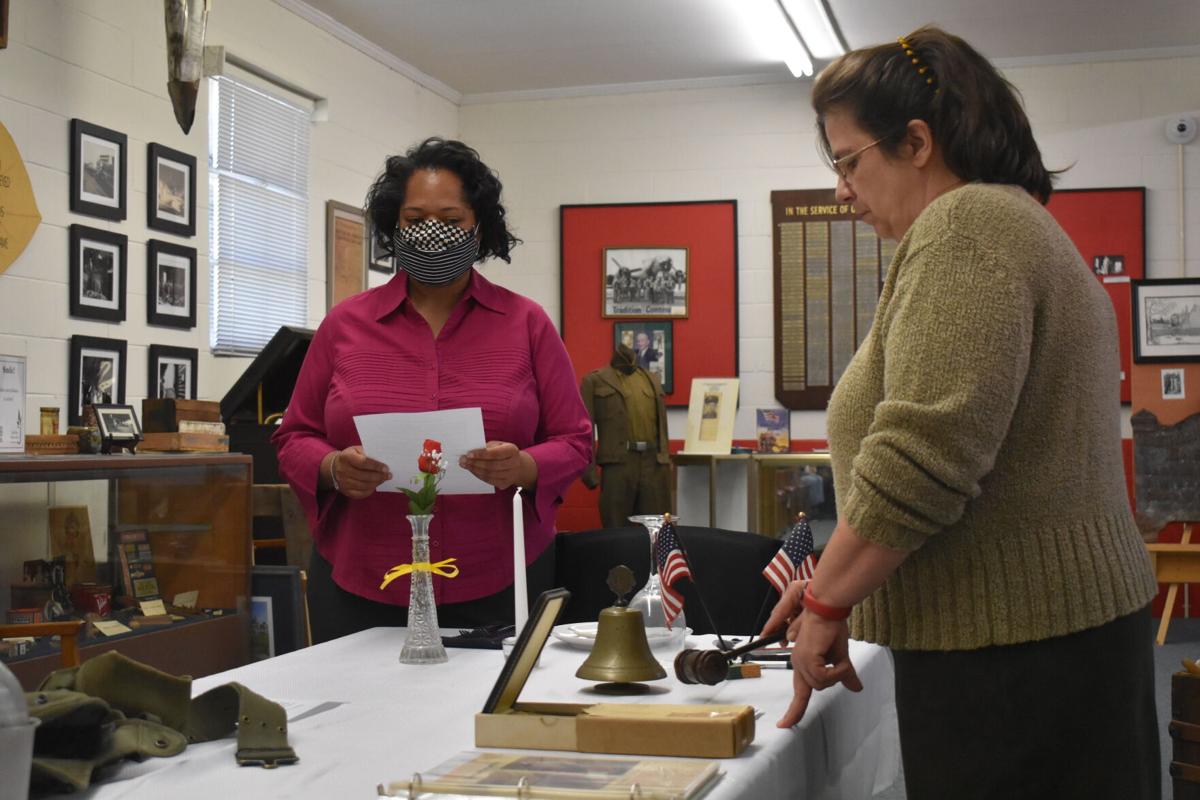 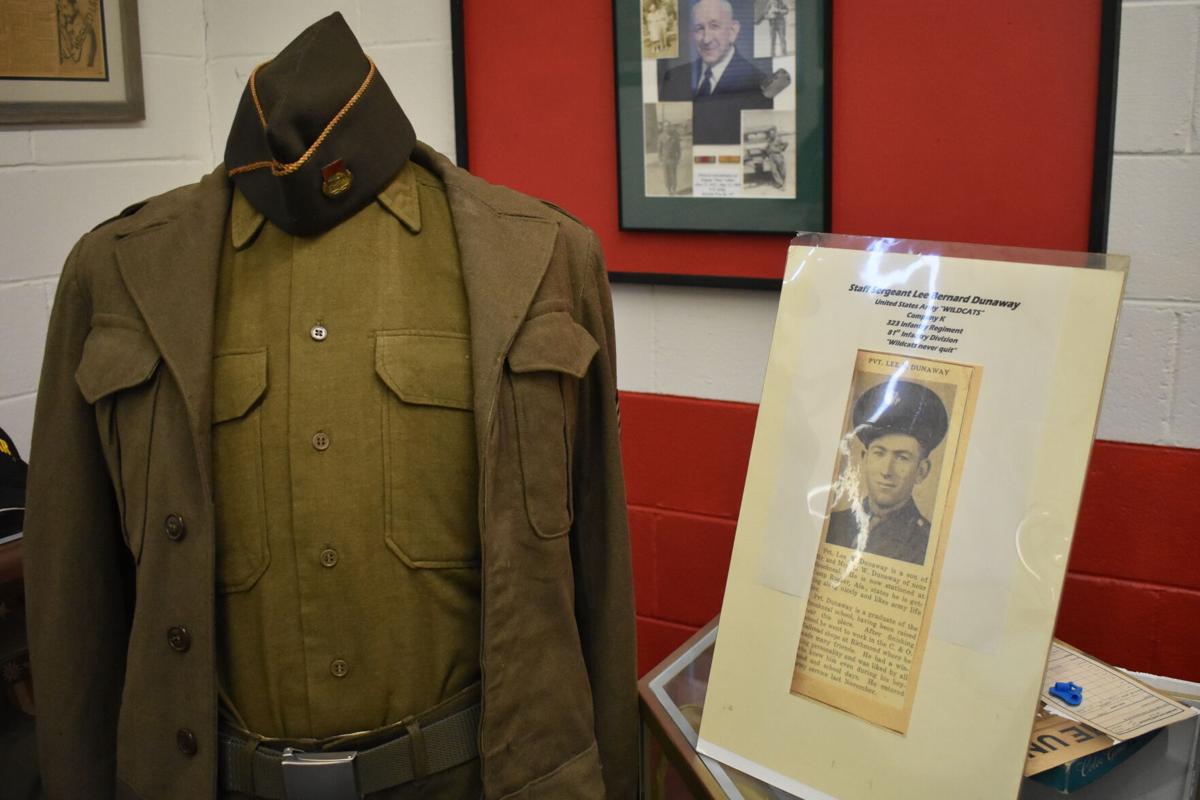 Gail Seamster offered her father's military garb for the exhibit.

Gail Seamster offered her father's military garb for the exhibit.

Tywanna Whorley, Adult Services Librarian at PHML, began the afternoon with a POW MIA Remembrance Ceremony. The ceremony entails setting a table for one, and reading a series of dedications to honor those lost to war, each sentence punctuated with a call to “remember,” and the ringing of a bell placed at the table. Fellow PHML librarian Mary Beth Jones helped Whorley perform the observance.

“All of you who served with them and called them comrades,” Whorley read to those gathered, “who depended upon their might and aid, and relied upon them, for surely, they have not forsaken you……. Remember!”

Other symbols were placed at the table including a candle, to represent the upward reach of an unconquerable spirit, a lemon slice, representing a bitter fate and a white table cloth to represent purity of intentions.

After the ceremony, guests had the opportunity to look at various newspaper clippings, photos, military garb and more in the Willie Hodges Booth Museum. All donated items were returned afterwards. Whorley also set up tables full of posters from the WWII era, like a reproduction of the famous “Loose Lips Might Sink Ships,” poster.

Former PHML director Gail Seamster loaned the military garb of her father, Lee B. Dunaway, to PHML for the ceremony. Dunaway, Company K, 323rd infantry regiment, 81st infantry division reached the rank of staff sergeant during his service. A newspaper clipping described Dunaway, a graduate of the Brookneal School, as having “a winning personality.” Dunaway was a private stationed at Camp Rucker, Alabama when the clipping was published. Before joining the military he worked in the C & O Railroad shops in Richmond.

On November 6, Whorley hosted a similar ceremony at Staunton River Memorial Library in Altavista. She said marine attire, army fatigues, shadowboxes, a ditch digger, various medical supplies, boots, a helmet, a helicopter rotor, a boxed meal meant to be eaten in the field and other items were loaned for that event. One donor provided a slew of WWII artifacts used in the war effort by women.

“I was like ‘wow, all women,’ he was like ‘yes, I wanted to highlight the women and what they did during the wars,’” Whorley said.

Whorley, whose stepfather was a veteran of the Vietnam War, said she was happy to stage both events and temporary exhibits.

“For the library and the community, I really wanted them to see, and to appreciate, the men and women who served,” she said.

As veterans left the ceremony at PHML, they were given cards made by Brookneal Baptist Church’s pre-k class. Each one bore a student’s handprint, and the phrase “not all heroes wear capes, thank you for your service.”

“I think this was a stirring tribute of honor and remembrance,” he said when asked for his opinion of the afternoon’s proceedings. “It paid homage to military greatness, and to the ideals of patriotism which are still precious to so many of us.”