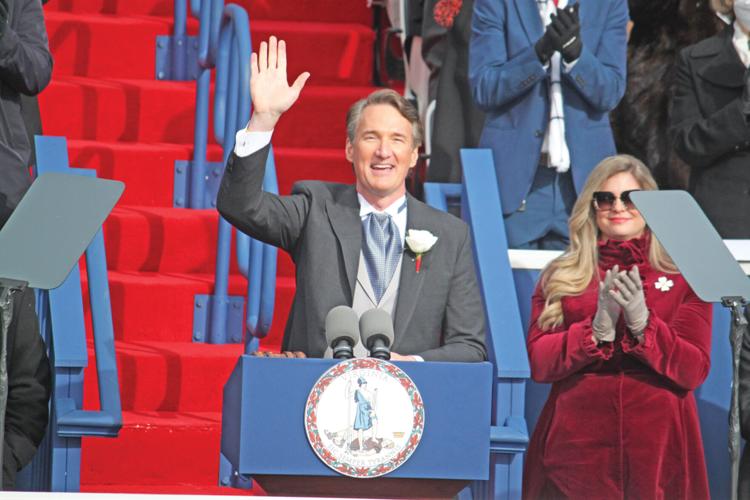 Glenn Youngkin thanks everyone in attendance after finishing his speech by proclaiming, “Virginia is open for business.” and “Let’s get to work.” Huge applause and cheers followed. 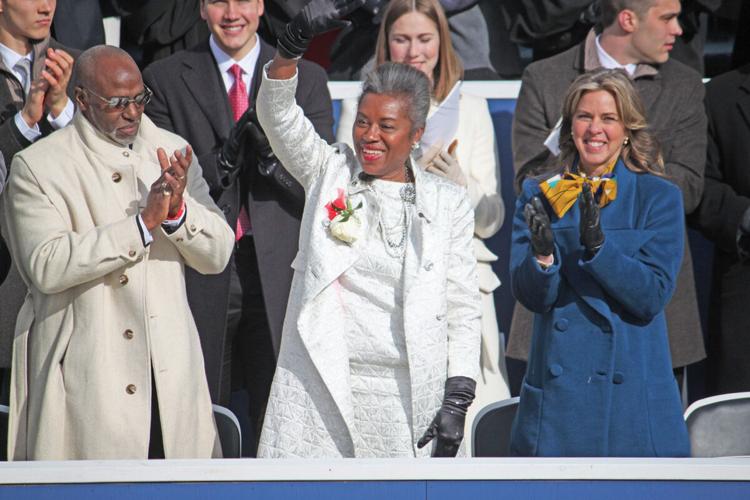 Lt. Governor Winsome Sears waves in acknowledgement to the crowd as applause and cheers rang out during Glenn Youngkin’s inauguration speech. 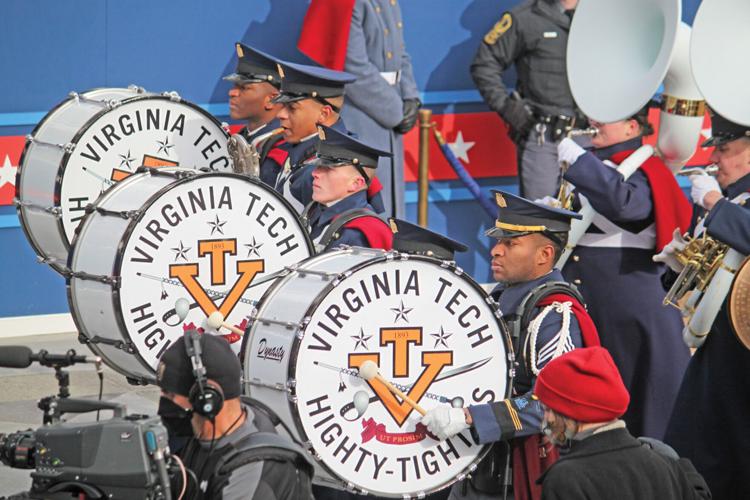 The Virginia Tech Regimental Band, the Highty-Tighties, perform during the inauguration parade. Founded in 1893, the 140-member band represents the Virginia Tech Corps of Cadets. 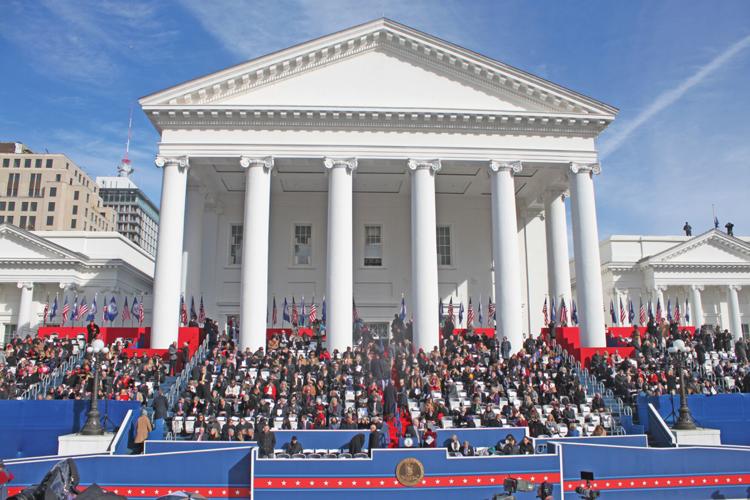 A landscape shot of the State Capitol. It was a sell-out crowd with a ton of energy.

Glenn Youngkin thanks everyone in attendance after finishing his speech by proclaiming, “Virginia is open for business.” and “Let’s get to work.” Huge applause and cheers followed.

Lt. Governor Winsome Sears waves in acknowledgement to the crowd as applause and cheers rang out during Glenn Youngkin’s inauguration speech.

The Virginia Tech Regimental Band, the Highty-Tighties, perform during the inauguration parade. Founded in 1893, the 140-member band represents the Virginia Tech Corps of Cadets.

A landscape shot of the State Capitol. It was a sell-out crowd with a ton of energy.

RICHMOND, Va. - On a chilly Saturday afternoon, there was a new change of guard in Richmond and Virginia.

Glenn Youngkin was officially sworn in as the 74th governor of Virginia in front of a raucous, sold-out crowd. Lt. Governor Winsome Sears and Attorney General Jason Miyares also assumed their new positions.

As each person took the oath of office, it was followed by thunderous applause. The Hon. Kevin M. Duffan, 2nd Judicial Circuit Judge of Virginia administered the oath to Miyares and the Hon. Richard D. Taylor, Jr., retired judge of the 13th Judicial Circuit of Virginia, administered the oath to Sears. When Youngkin took his oath, administered by retired justice, the Hon. Elizabeth A. McClanahan, cannon fire followed by the Virginia Army National Guard, 1st Battalion, 111th Field Artillery, signifying a new leader.

Youngkin opened his speech uniting all Virginians and used the word “humbled.”

“My fellow Virginians, today we gather not as individuals, nor as Republicans or Democrats, but today we gather as Virginians. And for the 73rd time, in the history of Virginia, the home of American democracy, we’re participating in the peaceful and orderly transition of leadership. The will of the people grants license to serve. A temporary license extended with trust, with hope and with expectation to deliver on promises made, and therefore as I reflect on my Virginia home and my love for this great nation and its founding principles, I am so humbled to be sworn in today as the 74th governor of the Commonwealth of Virginia!”

“Their love for Virginia shines through, and their many years of dedication simply suggest basic words, “We love Virginia.” On behalf of the Commonwealth, I want to thank you for your service,” Youngkin said.

Youngkin praised the record-breaking turnout in the last election. “Nearly 3.3 million Virginians who sent us here to restore trust in government and to restore power to the people. We stand here today as the messengers of that movement and trust to protect liberty, create opportunity and build unity for the hard work ahead. It’s not about me, but rather, it’s about us.”

He would detail how Virginians have struggled in the past couple years but pledged to be one’s leader.

“No matter who you voted for, I pledge to be your advocate, your voice, your governor. We stand here on Jan. 15, 2022, filled with hope and optimism for the years ahead. This hope and optimism springs from a shared vision of the future and also knowing what we’ve been through. We are all acutely aware of the struggles Virginians have endured over the last two years, struggles we continue to face. Not a single one of us has escaped the tragic consequences of COVID-19. Today we lift up our prayers for the more than 15,000 Virginians whose lives have been lost. We pray for their families, and we pray for those who have survived, but who lost jobs, lost an income, lost a business or even lost hope. We know the impact born by children who fell behind because their classrooms were locked down too long and the strain placed on parents, especially Virginia’s moms, who had to juggle with homes becoming job sites and virtual classrooms overnight.”

Youngkin continued with financial impacts and differences in public opinion.

“This moment of hardship has been compounded by economic factors, inflation, supply chain failures, rising grocery, gas and utility bills, as well as higher taxes and stagnant growth. We’ve all witnessed a rise in decisiveness in the public square and distrust in public figures. Our politics have become too toxic. Soundbites have replaced solutions, have taken precedence over good faith problem-solving. Yet as we stand here today, I join you with an unbridled sense of optimism because I know and I trust Virginians. Despite the continuing challenges posed by COVID-19, I see a path forward, not to some pessimistic new normal, but to a new and better day. Our common path forward is with the miracle of modern medicine. It’s given us vaccines, new therapeutics and medical treatments, and our common path forward is also forged with a deep and abiding respect for individual freedom. I come to this moment and to this office knowing that we must bind the wounds of division, restore trust, find common cause for the common good and strengthen the spirit of Virginia. It’s not a spirit that is rested in the government telling us what is best for us, but rather reflecting the will of the people and a government and elected leaders going to work every day for we the people.”

Youngkin would give praise to Virginians and barrier breakers who changed history, like Maggie Walker and former governor Doug Wilder and gave acknowledgement to new Lt. Governor Sears and Attorney General Miyares.

“The people of Virginia just elected the most diverse leadership in Commonwealth history, sending a message that Virginia is big enough for the hopes and dreams of a diverse people. We stand here today to accept the license to lead and will do so by including all and welcoming all because the future of Virginia belongs to all.” Youngkin said.

Youngkin would outline what would be done from day one including: raising standards, raising teacher pay, investing in facilities, investing of children with disabilities, create innovation lab and charter schools of achievement within the public school system, removing politics from the classroom, refocusing on essential math, science, reading and teaching all history, keeping children in school five days a week, tackling high cost of living, suspending the recent tax increase on gasoline for one year, eliminating the grocery tax altogether, doubling the standard deduction on income tax, rein in skyrocketing property taxes, provide the largest tax rebate in Virginia’s history and cutting taxes on military and veterans retirement benefits and fully funding law enforcement.

“Cost of living in Virginia is not merely about restraining taxes, it’s about growing incomes and opportunities as well. Starting today, we will be crystal clear. Virginia is open for business. We are going to get all Virginians back to work!” Youngkin emphasized. “Together we will create 400,000 jobs and 10,000 new startups over the next four years, lifting up all Virginians. We’re going to make Virginia competitive again, no longer conceding corporate relocations and expansions to our friends in Maryland, North Carolina and Tennessee. We will compete and we will win!

Youngkin concluded by expressing optimism for the future while navigating today’s challenges.

“We are one Virginia. We are sailing in the same boat, and with faith and a loving God, whose presence can be felt here today, and in partnership with Lt. Gov. Sears and Attorney General Miyares, in partnership with our cabinet, in partnership with the duly, elected leaders of the Virginia assembly, we will chart and sail a course through the present troubled waters, so we reach the shores of a new and better day, a new and better day with more opportunity and prosperity. What we can do together is truly limitless. We must set our eyes on the common values and common future that unites us, to work every day to strengthen the spirit of Virginia and redeem the promise of our people. My fellow Virginians, it’s day one. Let’s get to work.”

There's more to this story! Pick up a copy of this week's Union Star to read all about it and other news.