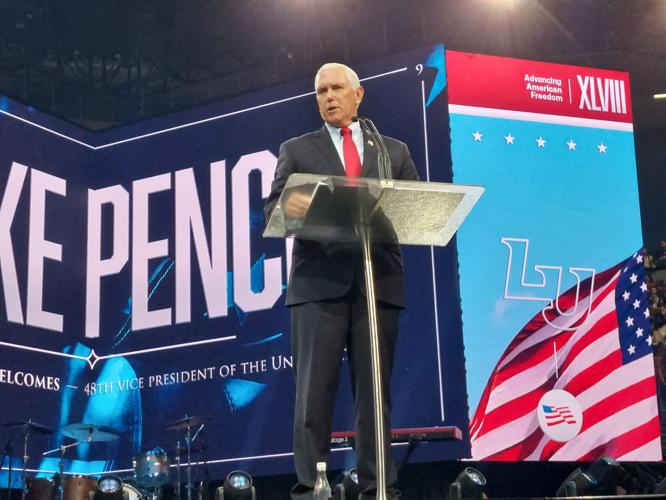 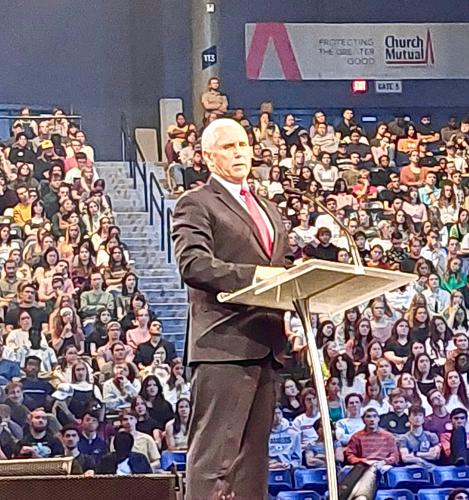 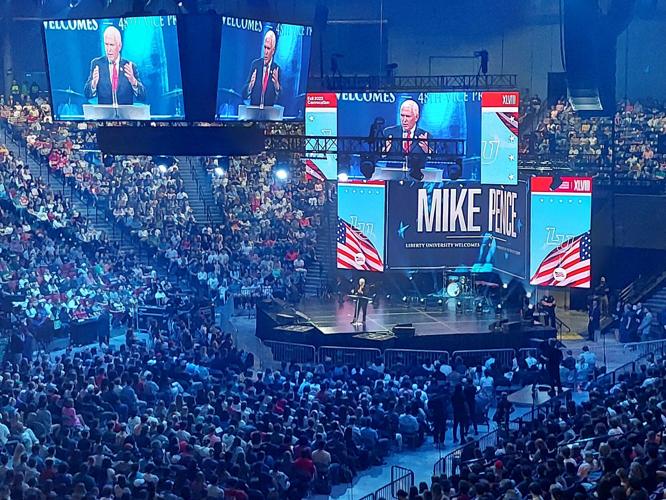 Following an introduction by Helms School of Government Dean and former Congressman Robert Hurt, Pence took the stage and said he preferred a shorter introduction. “I’m a Christian, a conservative, and a Republican - in that order,” he declared.

Pence shared his faith journey - his growth from a nominal Christian to understanding the full implications of the gospel and surrendering his life to Christ as Lord and Savior.

He also spoke of his political career, which he explained was anchored by his faith. The Indiana native served as a U.S. Congressman for 12 years, Governor of Indiana for four years, and most recently, Vice President of the United States for four years.

In speaking of the many successes of the Trump-Pence administration - in areas such as military and veterans’ affairs, economics, taxes, and immigration - he pointed to the appointment of 300 conservative judges, and in particular three to the United States Supreme Court as the greatest achievement.

It was that latter accomplishment that led to an even bigger result: “On June 24 of this year, we sent Roe v. Wade to the ash heap of history,” he proclaimed, to thunderous applause from the audience. He reminded the students that it was not the end of the struggle to defend the most vulnerable lives, but the beginning.

“Let me say to each and every one of you from my heart: in this historic moment, I urge you in this rising generation to continue to be champions for Life. We must not rest, and we must not relent until we restore the sanctity of life to the center of American law in every state of the nation,” he exhorted.

Pence told the students that he came to Liberty today “to issue a call to action. Today I come to tell you to prepare your minds for action. As the Bible says, to whom much is given, much will be required,” he reminded the students.

“Take time in these years of study to understand what made this country special and unique. You must be the freedom generation, because the truth is, your generation may be the last line of defense for the Constitution of the United States.”

Continuing to remind them of the importance of the Constitution, he admonished, “I urge you to let the Constitution be your guide: understand it, study it, and learn it as Americans, because you may well in your life be called on in unique ways to defend it.”

Earlier this summer, Mr. Pence visited Montpelier in the Charlottesville area - the home of James Madison, the architect of the Constitution, “the greatest charter in the history of mankind.” Madison and his constitution received considerable applause, as well.

He briefly enumerated some of the disasters of the Biden-Harris administration, including hyperinflation, increased taxes, the border crisis, and more. He particularly pointed to the escalating push for woke leftist values, noting that “big media and big government have linked arms” in their support of woke values and in their assault on free speech and the Constitution.

The audience erupted in great applause when Pence stated that whereas “Biden has pledged to defend the ‘God-given right’ for men to compete in women’s sports,” conservatives need to fight against that policy. He referred to parents in Virginia standing up to woke values at the local and state levels as another example of engaging in society and government by promoting virtuous values..

The 48th Vice President did not sugar-coat his message: he cautioned the students that living a life of faith and standing for Christian and conservative values could bring trials. He referenced Shadrach, Meshach, and Abednego and the fiery furnace, but he added that the Lord was with them.

He extolled the importance of rooting their lives in daily Bible reading and prayer. “The foundation of America is freedom, but the foundation of freedom his faith,” he stated. “Where the Spirit of the Lord is, there is liberty,” he reminded them in closing.

The Rev. Jonathan Falwell, Campus Pastor at Liberty and Senior Pastor of Thomas Road Baptist Church, reminded the students that “a key goal of Convocation is to remind them of how their faith ought to influence their lives and careers following their time at Liberty,” a press release from the university stated.

Falwell proclaimed, “part of our Convocation purpose, what we do here, is to make sure that all of us understand that regardless of what we do in life, our faith is not something that we place on a shelf; it is something that you take with you wherever you might go. Today our guest is one who has been a model of that in his career.”

And such was the message and challenge which Vice President Pence brought to Liberty University Convocation.